Mantha is a young zombie girl and one of Casper's best creature friends. She is very proud of her status as a zombie and is desperately eager to break out of the "mumbling, stumbling, incoherent moaning" stereotype.

Mantha has blue-green tinted skin typical of a corpse. Her hair is blue with darker blue streaks, and it falls between mid-back to waist length. She has almond-shaped purple eyes.

Her regular outfit consists of a tattered dark pink elbow-length shirt with a white flower on it and a short faded black skirt underneath, tattered purple flare pants and black and pink sneakers.

In the movie, her appearance is generally the same. There are, however, a few minor differences - her shirt has a yellow rose instead of the white-petaled flower, her shoes are solid black, and her eyes have a slight glow to them.

Mantha is fiercely independent, often considering accepting help from others as a sign of weakness. She takes great pride in her independence and ability to make rational decisions without the influence of others. She values rationality and political correctness, and frequently tries to instill the belief that all creatures are equal into her classmates.

Mantha greatly dislikes the stereotype that zombies are unintelligent and slow, as she is neither of those things and goes out of her way to defy the common perception of her kind. Mantha can be very sensitive about the subject, as it angers her quickly.

Mantha appears to be more benign that many of her classmates. She is willing to befriend others, such as Casper, Ra, and Jimmy, though she still values being monstrous. She also advocates for the equal treatment of all creatures in the Underworld, and is usually willing to help others in the case that problems should arise.

Mantha can also be condescending, sarcastic, and cynical. She doesn't take well to being ignored, and her adamant nature sometimes prevents her from seeking help when she needs it.

Mantha is able to remove parts of her body at will, despite lacking any physical connection between her head and those parts of her body removed in this fashion, Mantha remains able to control said parts at all times (e.g., she is able to see using eyes removed from their sockets and detached from their optic nerves). This "ability" is sometimes a hindrance i.e. she is often unable to keep them attached to her body. She is also able to lend her body parts to those who can use them e.g. in The Last Dance she gives her legs to Hedy Hopper so she could dance with Frankengymteacher in order to remove the dancing shoes stuck to her feet.

Mantha's parents have only been referred to offhandedly on one occasion in the first season. It is unknown what they look like or who they are. In Time Waits for No Ghost, it is revealed that they live in a mausoleum. The second season episode Stage Fright showed two similarly tinted arms and eyes alongside a camera - possibly intended to represent her parents. Otherwise, there is no explicit references to them outside of this instances.

Casper and Mantha are close friends. Mantha sometimes gets upset when Casper hangs out with Jimmy rather than with her and Ra and seems to believe that only she and Ra are Casper's best friends.

In season two, a previously unheard of character by the name of Frankie was introduced. He was apparently a pen-pal of Mantha's, and it was revealed that she harbored romantic feelings for him. When he arrived at the dance, it was revealed that the feeling was mutual. However, aside from this episode, Mantha never mentions him in any episode before or after this one.

Ra, along with Casper, is Mantha's best creature friend. Like with Casper, Mantha sometimes has to look out for Ra due to his naiveness.

Jimmy and Mantha are good friends, although Mantha can sometimes get upset when Casper hangs out with Jimmy rather than with her and Ra.

When she isn't with her gang, Dummy Girl still acts hostile towards Mantha. However, Dummy Girl was impressed when Mantha confessed that she had Crypt Critters and decided to go to the Nurse and asked Mantha is she was okay.

A nurse mistakes Mantha for a sick human girl

Mantha leads a group of "Zombies", who are actually actors 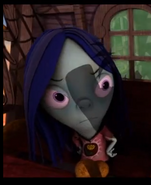 Mantha and Frankie in "Last Dance" 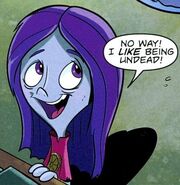 Mantha as she appears in the comics. (issue #2)

The movie poster of the movie inspired by Mantha: "Z: Queen of the Zombies" from the episode You Oughta Be In Pictures

Community content is available under CC-BY-SA unless otherwise noted.
Advertisement