Slither is a member of Thatch's gang. He appeared sometimes as a background character, whilst in other episodes with Thatch.

He wears a dark blue/navy blue robe, long enough to hide his lower body (which it doesn't have legs, since he is a snake creature). He has tentacles instead of hands, striped with purple and white and he has a loong/medium white/grey-ish hair. He also had grey maleviolent eyes and has a unibrow. He has a pale skin, like Thatch.

In his movie debut, he has no lines, but he appears the same, but he has dark eye sockets which is darker than in the TV series

Slither is seemed to be morbid/gloomy. However, he can be seen smiling, probably as a pleasant of hearing Thatch's commands/pranks. Because he is a background character mostly, Slither showed less other personalities.

His voice can be deep in season 1, but in season 2, he sounds less deeper than before 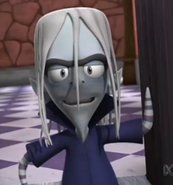 Thatch and Slither in Stage Fright
Community content is available under CC-BY-SA unless otherwise noted.
Advertisement