Thatch, also known as Thatch The Vampire Bully, is a vampire who is a student at Scare School and acts as a secondary antagonist of the movie. He is one of the rivals of Casper and shows great distaste for him due to Casper's friendliness. He claims he is popular, but he usually has a foul disposition and enjoys irritating and belittling other students. He usually associates himself with Mosshead, Dummy Girl, Slither and, occasionally, Harpy.

Thatch has short black hair with long, spiky bangs that have a white stripe, purple eyes slightly darker than Mantha's. Unlike most vampires, all of his teeth are very sharp. His nails are painted black. He usually wears a white dress shirt, black pants, a belt with a chain attached to it, black,white and gray sneakers and a black and red cape with a high collar. He is slightly taller than Casper and the others.

Thatch is arrogant, mean-spirited, selfish, and is very insistent on having things done his way. He projects an aura of confidence that borders on narcissistic, and frequently boasts that he is the best monster in the school.

Although he acts very cold and removed, he is not as tough as he seems - as he cried when he lost the respect of his gang in Bully For You. Despite his spiteful nature and love of chaos, he has a bit of a soft side. This can be seen in episodes such as "Quacky Duck" and "Opposite Day." (Although it should be noted that "Opposite Day" reversed his personality.)

Due to Thatch's cruel, manipulative and selfish personality, he has made enemies with almost every person he has come upon in the school. (Though he sometimes appears unaware of it.)

Very little is known about Thatch's relationship with his parents, although his mother apparently worries about him and wants him to be popular while Thatch is nice to them when speaking to them, which he doesn't do with anybody else. This is shown in the movie, where Thatch can be heard talking to his mother on the phone; reassuring her that "everything's going great, Ma," that he got "a B+ in lurking," is "drinking enough blood!" and is "real popular".

In the second season of the show, Thatch's father wishes Thatch good luck to win the Grimly Award over a phone conversation with Thatch.

Slither, Dummy Girl, Mosshead and (occasionally) Harpy usually hang out with Thatch and help him with his schemes. Despite that, Thatch shows no respect towards them and treats them almost as bad as everyone else. It is heavily implied that Thatch's gang don't consider him a friend but he does. They have been known to ditch him when he is in trouble, particularly in "Bully for You," in which they inform him that it's "nothing personal," but his run is over, and that's just how it is. It's implied that Thatch has apologized to them at least once in "Fang Decay," but only at Casper's suggestion, after Casper and his friends helped him with his toothache. Dummygirl seems to put up with his antics the least, though not by much. She actually responds with violence when he insults her dancing skills in "My Fair Harpy," though he seems mostly unfazed by it.

Casper is usually Thatch's main target for bullying due to the ghost's friendly attitude. Thatch often does everything he can to get Casper is trouble, although it generally backfires on him. In season 2, Thatch and Casper got a lot more aggressive towards each other. But in Thatch My Idol, Bully For You, and Opposite Day, he is shown to be a bit friendlier to Casper at times. On the rare occasions that the two share a common goal, such as in "Power Outage," Thatch has been known to help Casper set things right. However, as soon as things blow over he goes back to bullying him as if it never happened.

Most of (if not all) the students of Scare School strongly dislike Thatch due to him bullying them, but many, if not most, seem to harbor a begrudging respect for him. Mantha and Ra even request his help in "Bands on the Run" when they wanted to get back at Casper for ignoring them, although this may have been as much for his animosity towards Casper as it was for his musical talent. The girls of the school once signed a petition agreeing not to go to the dance with him. Even the teachers seem to dislike him, as he is forever getting into trouble. His greatest enemy, however, is Casper.

Thatch isn't as rude with Mantha as he is with her friends, although this could be due to the lack of interaction that they have one-on-one. In "Thatch my Idol," she has one of the stronger reactions to the friendship potion, and appears to fall in love with him. It is unknown if this is because she liked or disliked him more than the other girls at the time.

Thatch bullies Triclops to the point where she entrapped him in his rubber duck to get back at him using her magical rings. ("Triclops, Mistress of Darkness") She also "plays" with her new powers by tormenting him with cacti, trash cans, etc. Before this, Thatch had laughed at her for being a pushover.

Apparently Frankengymteacher dislikes Thatch since he stole Thatch's sandwich and ate it in front of him when he believed he was invisible in "Now You See Me Now You Don't". He also hauls him away during the movie after one of his attempts to outshine Casper go wrong. Thatch indignantly exclaims, "I thought you liked mean!" to which Frankengymteacher responds, "Not to me!"

Cappy has a negative attitude towards Thatch due to his nasty behavior, particularly towards Casper. (Cappy once forced Thatch to serve as the Headmasters' serving boy during their cruise, and made him drink Bilgewater Tea, presumably more than once, because he tried to give away Casper and his friends' presence on the ship.)

Alder and Dash recognize Thatch as their top student, but obviously bear no affection or respect for him regardless. They often threaten him in order to manipulate him into doing things for them, such as throwing the Slugby match to make them look good, or winning the Grimly Award to preserve the image of the school. (As well as his own family.) In "Bully for You," they are relieved to find out that the students are revolting against him, and not them. (They mistook "Thatch" for "Dash.")

Prof. Burns once threatened to feed Thatch to his own glouch, so it's safe to say that he doesn't particularly like him, although he doesn't seem to hate him, either.

Thatch displays vampiric traits, mostly in his ability to drink blood and transform into a bat. He has fangs and wears a classic vampiric cape. The ends of his cape and the shape of his hair are reminiscent of bat wings.

Oddly enough, he seems to have no aversion to sunlight - as he has been to Deedstown several times during the day. The most recent theory to explain this is that he may be a living vampire. The denotation of this is that only living vampires may go outside and live by day, whilst undead ones live by night. This theory is also supported by the fact that Thatch appears to have been born a vampire, and was never turned into an undead thrall by another.

He apparently can cry acid, as he once cried for not having the respect of his gang, and his tears burned holes through his cape. 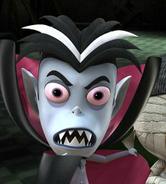 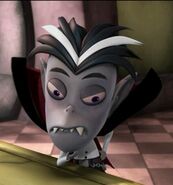 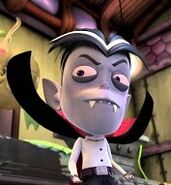 Thatch in "Bully for You" 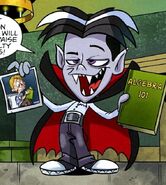 Thatch as he appears in the comics. (issue #2) 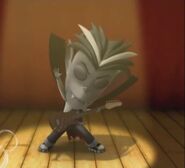 Thatch playing guitar in the episode "Bands On The Run"

Thatch talking to his mom on the phone (in the movie)