Wolfie is a character introduced in Casper's Scare School: A werewolf, and a student of the Scare School, he serves mostly as a background character in the show, but sometimes he is featured in larger roles.

All of his body is covered with brown fur, with lighter brown and white around his facial area.

He has yellow sclera (with green irises). He also has a pair of big fangs. He wears a tattered green t-shirt and purple calf-length pants that are secured with a yellow rope. He also has black claws on his paws.

In the animated film his fur is longer and he wears a red shirt. He also seems to have a singular tusk like fang, unlike the series.

Most of the time, Wolfie is just like a puppy; he likes to fetch, chase his tail and can't resist bones. But every full moon, he goes berserk and has to eat in the corner of the cafeteria for the other students' safety. When this happens he grows several times his original size and he becomes very strong, very fast, and out of control and ferociously vicious.

Wolfie likes to be the School's D.J. He was a D.J. in the episodes "My Fair Harpy" and in "The Last Dance", and he has shown an interest for science.

Role in the series[]

In the second season, Wolfie serves mostly as a background character, but season one features him in a larger role. He is one of Casper's closest friends and a main character in the comics.

He once conducted an experiment in efforts to capture and harness moonlight when the moon was full, but it caused an energy surge that caused everyone in the school to act the opposite of how they normally would. Wolfie turned savage while Thatch turned nice, and Mickey and Monaco both turned smart. Casper, Thatch, Mickey and Monaco had to find a way to reverse the effect without getting eaten by Wolfie.

Wolfie once walked a mile in another's shoes in fleshed out when he turned into a human ("fleshie") and was banished from the school. Unfortunately, Alder & Dash plotted to turn him to stone, fearing he may reveal the secrets of Scare School to the humans. Luckily, Casper discovered that Wolfie turned into a fleshie because he became too relaxed (ironcially, via by laughing at fleshie-jokes), and by making Wolfie angry, he could become a werewolf again. Thatch, while insulting and scaring some other humans, got Wolfie angry after he had learned more about humans, and angrily stood up for them, bringing him back to his werewolf self, and he was allowed back in the school.

In the 2nd season episode "Our Boy Wolfie", the little werewolf had another dose of the fleshie life. While trying to hunt down Wolfie on one of his full-moon rampages, Casper's human friend, Jimmy, promised to help (while wearing a werewolf costume). After bumping into his mail box, Jimmy stumbled past the window where his parents saw him, and then he howled in pain. Casper, Mantha, Ra, and Jimmy ran away as fast as they could so they wouldn't be seen, and by the time they left; Wolfie was in front of Jimmy's house, right when his parents opened the door. With the clouds covering the full moon, Wolfie returned to his normal state, but Jimmy's parents thinks he is Jimmy. Thinking that "Jimmy" was turned this way due to his dad's monster hunting job, his parents argee to love their "son" in his condtition. Wolfie ended up living in a pampered life, getting chocolate milk and playing video games, and decided to never return to Scare School and just replace Jimmy in his house all together. Unable to just have Jimmy appear to prove that Wolfie is lying without risking his life to his dad, Casper and his friends try to just switch the two, except all their plans failed, until Casper tricked Wolfie into doing the "fun" stuff on a school night: like doing homework, chores, and getting a bath; which horrorifed Wolfie so much he ran out, letting Jimmy taking his rightful place with his family.

Casper, Ra, and Mantha are Wolfie's best friends. Although he doesn't hang out with them too often, Wolfie occasionally tags along with them on their adventures.

In season two, it is unknown if Wolfie is still a member of Casper's gang. Since he is alone most of the time, rarely hangs out with Casper, and his behavior towards the ghost is sometimes kind of unfriendly.

In season one, Wolfie and Jimmy are friends. Wolfie helped Jimmy in "Ghostbust a Move" and in "Jimmy Bradley, Creature Catcher" Jimmy said they are friends. However, in season two, Wolfie doesn't even know who Jimmy is, and they are no longer friends.

-"I am a werewolf and you can't catch me"- Wolfie; Jimmy Bradley: Creature Catcher 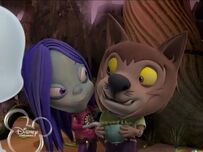 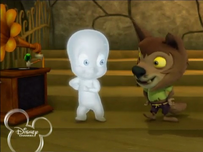 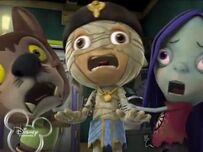 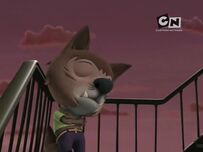 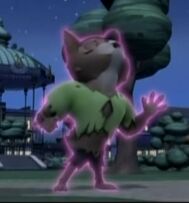 Wolfie under the full moon.

Wolfie in the episode "our boy wolfie"

Wolfie as he appears in the comics. (issue #2)

Casper and Wolfie in the issue #2. 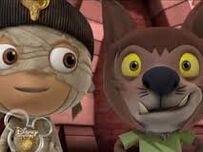 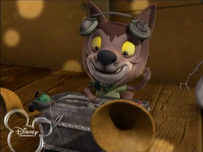